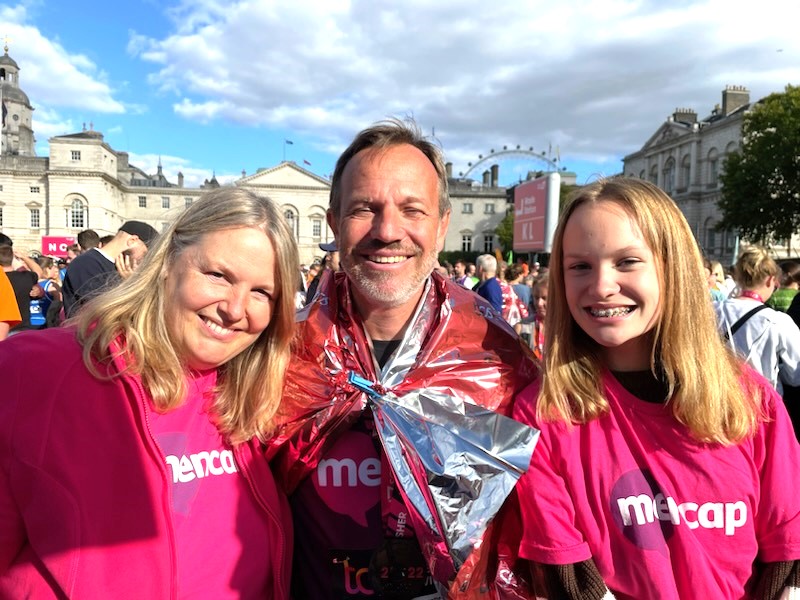 ..my official time to complete the London Marathon – 26.2 miles of energy, exhaustion and exhilaration!

The course starts on Blackheath Common and then runs through residential areas and along the South Circular Road to Greenwich (look right for the Royal Naval College by the Thames, look left for the Observatory perched on its hill). Then its onto the Cutty Sark (where the crowds are huge). Further on, the course suddenly turns a corner going slightly uphill (oh heck!) and then you realise that you are on the approach to Tower Bridge – yippee, half way there!

Crossing onto the north side of the Thames, you feel on more familiar territory as you run East to the Isle of Dogs (that loop in the river which you see on the credits of Eastenders) and then you weave through the skyscrapers of Canary Wharf. After that, the course heads back West towards The City and Westminster and runs alongside the mighty curve of the river Thames with the Houses of Parliament in view but which never seem to get any closer. Then its along Birdcage Walk and, just before Buckingham Palace, you see in huge letters on a bridge over the road the words “385 Yards To Go!” and so to the finish, halfway down The Mall. 26.2 miles.

I am sure that each runner will have their own Marathon story to tell. My story was of starting well (perhaps too well) but then hitting something of a wall at about the 20-mile point. Out came the Kendal Mint Cake (safely stowed in my pocket) washed down with Lucozade from a re-hydration point. And then I was off again, not stopping until I had crossed the finish line, apart from exchanging a few words with Steph and Katie who were standing along the Embankment. After the race, I met representatives from Mencap at a runners’ reception in the crypt of St Martins in the Fields where I had a massage (never had one of those before!) and a meal, both provided by the charity.

The London Marathon 2022 was a display of humanity at its best – runners wishing each other a good marathon, volunteers expertly regulating the flow of 42,000 or so runners at the start, bands playing along the route, people manning the water stations every two miles, the Police out to ensure the smooth running of the event and St John’s Ambulance personnel to look after everybody’s welfare. And the crowds – so many people cheering you on, holding out containers full of sweets along the side of the road or sporting large cardboard placards saying “Punch here to power up!”

By mid October, I have raised almost £2,000 for Mencap. I am most grateful to all of you who kindly sponsored me on my Just Giving page (as well as to those who bought cakes and donated at the recent after church cake sale!) and helped me achieve my financial goal. Thank you.

4 hours, 35 minutes and 44 seconds – an experience that will live long in the memory.