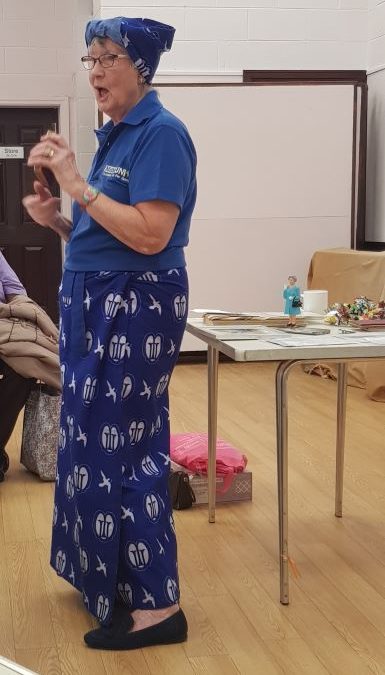 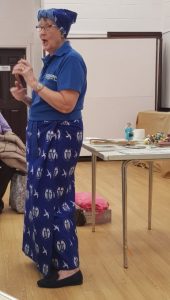 Well, where do I begin? Ellen Matthews turned up for our meeting and immediately went to change into her ‘costume’ – see above. This was an MU wrap skirt and turban and a Mothers’ Union Faith in Action t-shirt. This lady certainly showed Faith in Action.

Her talk was entitled ‘Mothers’ Union and Me’, and she claimed she was going to do 55 years of MU in 15 minutes. We knew this wasn’t going to happen as Ellen loved to share all her experiences with us, and she has had many experiences in helping others. She put us all to shame.

So, Ellen started with when she was born, then going to Sunday School (collecting those Sunday School stamps! ) and Whit walks. So many memories we all had. Her mother was a member of Mothers’ Union, so Ellen joined when she was in her teens, and has remained an active member ever since. Her question to us was ‘What brought you to Mothers’ Union?’

Her advice from her mother was always ‘Always go to people, don’t expect them to come to you’. That was the thought behind her life and her experiences. Many years ago she was sponsored to go to Malawi, given £50 to start a project over there. She donated £100 of her own money, and helped to set up a soap project over there as it was a commodity they didn’t have.

On returning from one of her travels she was approached by a young man who wanted to go to with her to Heathrow airport. He wanted to go to London to learn English. He wanted to become a psychiatrist. So she helped him get on his way, found accommodation and stayed in contact with him. He had to go back home for his arranged marriage, and invited her over, providing her with a beautiful sari. He is now a prominent psychiatrist giving conferences in Europe. How many of us would have just ignored him and hoped he would sort himself out?

Ellen has been to countless countries, including Peru – she just didn’t have enough time to tell us everything, but she did bring photo albums to show us. It seems she can’t stay still, and has recently come back from Antarctica. She was such an amazing amusing character she had us in stitches all the way through with her antics, but really she had lived a life of Faith in Action.

Whenever I rang her she was always just on her way to or coming back from helping to clean up the cemetery in Middlewich. That was Ellen.

Our next meeting will be just as fascinating, though perhaps not quite so amusing – John Clowes is coming to talk about ‘Twenty Years of Garden Design’, and if you have ever visited John’s garden you will know it is incredible. This meeting will be on Wednesday October 19th at 2pm in the Church hall.  If you need any more information ring Dorothy Wood on 01477 533704. Hope to see you there.

Don’t forget the November meeting on 16th is entitled ‘Who Inspired You?’ Bring your memorabilia, photos, articles, books to show us.

The December meeting will be the second Wednesday 14th, not the usual third one, as 21st December would be too close to Christmas.