This month we welcomed Shena Lewington, a Funeral Celebrant, based in Winterley, who gave us a lovely talk entitled ‘Hatch, Match and Dispatch’.

Shena has been invited to give talks on the Queen Mary sailing across to New York, so we were honoured to have her practice run on her talk, which she introduced with the idea of ‘Telling the Bees’. In days gone by people told the bees about happenings in the village, including rites of passage.

There are many different traditions when a baby is born, ranging from ‘silvering’ by putting a coin into the baby’s hand; Passing the baby, as in Bali; having their hair shaved as in Muslim tradition, or even the Japanese tradition of Baby Crying! This was a competition to see who could make the babies cry the hardest. Jewish baby boys were circumcised within their first week, and the Cornish Wiccan baby rites consisted of passing the baby through circular stones.

So then we learnt about the ‘Matching’ – the veil refers back to Roman times, safeguarding from evil spirits. Consent was not needed from the couple before Pope Alexander IV, and it was all based on family contract even from the age of 12. In 1926 the age of consent was raised to 16, in 1994 weddings were allowed to take place in approved premises as long as it was an indoor structure, such as hotels etc. Before this the wedding had to take place in a Church or Registry Office. Very recently this year, weddings are now to be allowed in approved outside settings. This idea developed from the problem of indoor settings during the pandemic.

Apparently in China, the bride and her bridesmaids and female members of the family had to cry every morning for a month before the wedding; in Scotland friends had to perform the ‘Blackening’ on the couple; in Norway traditional national costume is worn. As for carrying over the threshold, this refers back to the threshold which was used to keep in all the straw on the floor in the house, and the wife might trip over the high step.

Concerning ‘Dispatching’, there are many ways of remembering those we have lost, the most famous of which is the Taj Mahal. There is a British cemetery in Funchal, built because people in Madeira were Catholics, and many of the British living there were Protestant. In Holland, there is a Catholic and Protestant cemetery side by side. In Tibet, they perform sky burials. Most communities have funeral rites in order to honour the people lost.

It was a really interesting talk and certainly led to lots of discussion amongst members afterwards, including whether we have talked to our families about what we would want? Is this something we find easy to do? Probably not, but why not talk about it?

After a break of two years because of Covid constraints, we finally managed to organise the flowering of the Easter cross. Michelle Carter photographed the preparation of the cross, and Dorothy and Carole were on hand to help people attach their flower to the cross at the Easter Day communion services. The flowered cross after the second service is shown below (photo: Alan Rickards). 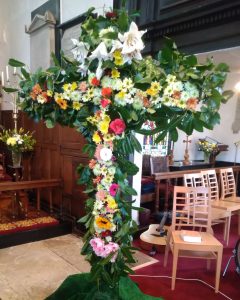 Next Meeting – Wednesday 18th May.

For our May meeting, Peter Cotton is coming to talk to us about Nell Gwynne – this should be entertaining! As usual, we will meet in the Church hall at 2pm on that day. Do please come and join us.

Our Strawberry Supper will be held on Tuesday June 14th at 7.30 in the Church Hall. Tickets will be £5, to include scones with strawberries and cream, and cake.

Please could you provide anything red, white or blue for our Colour Stall? It can be plants, flowers, candles, toiletries, chocolates or anything else you may have at home. We would like you also to come in red, white , blue clothes, as we will have celebrated the Platinum Jubilee the week before. Donations of cake would also be gratefully received on the night.

Many of you aren’t turning up to our meetings, and aren’t sending apologies which makes organising catering etc very difficult.

Dorothy prepared an afternoon tea in March and only 7 of our 30 members turned up! We had a reasonable turn out on Wednesday but only because 7 members from St. Johns Sandbach Heath came.  We will leave it in your hands !
Thanks!  Carole and Dorothy