Christian worship and mission following the Anglican tradition have been centred on St Luke’s church in Holmes Chapel in mid-Cheshire for many centuries.

Our Grade I listed historic parish church dates from about 1430 and is the prominent feature in the heart of the expanding village of Holmes Chapel.  We are fortunate to have access to the beauty and stillness of the old church building as well as the flexible facilities of our nearby modern Church Hall.

St Luke’s is a relatively small, Perpendicular timber church with Perpendicular sandstone west tower. The chancel and nave were encased in brickwork early in the 18th century.  Other alterations and extensions made largely in the 17th and 18th century,  including an extensive internal gallery.

The Grade I listing applies to the interior as well as the exterior because of its extensive timber framing and mediaeval roof truss arrangements which were revealed again after the plaster ceiling was removed in 1935.

Scroll throught the images below for detail on some of the historic furnishings and artefacts to be found in our church.

Note: A fuller history of the church can be found in the recent account: The Story of St Luke’s, Church Hulme, by Peter Cotton, Cath Cameron and Valerie White, published in December 2020 – details here. 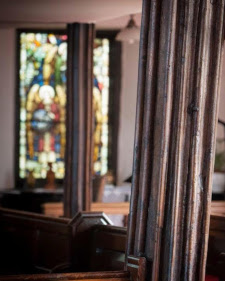 The eight oak pillars of the nave date from 1425. Each is octagonal and shaped from a tree trunk with an adze. Note how the eastern most pair lean outwards at a curious angle! 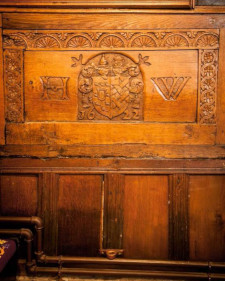 This dates from 1732 when the chancel was extended. On the south wall an interesting panel is carved with the arms of the Winnington family, the initials H.W. and the date 1622. Like the Cotton panel over the inner west door, its origin and purpose are unknown but possibly they both commemorate work done on the church in 1622. The carving around the Winnington panel suggests that it may once have been the front or lid of a wooden chest. 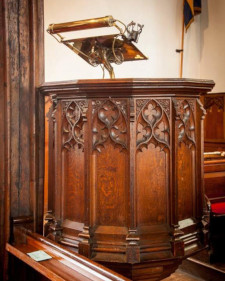 In 1723, the first pulpit was installed but, having been described as old and unsightly, it was replaced in 1853 by the present oak Victorian pulpit. It has occupied several positions in church and in 1971 was moved to its current place. 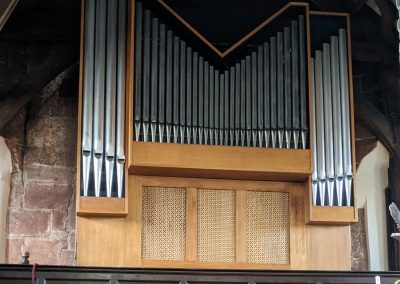 In 1816 a barrel organ was installed at a cost of £45. In 1851, it was replaced by a pipe organ costing £80. In 1886 a new pipe organ was opened to commemorate the Jubilee of Queen Victoria. A fund raised £150 and it cost £40 to install. In 1971, the organ was rebuilt at a cost of £2,000, including parts from the earlier instruments. At the same time the organ was relocated to the centre of the west gallery with a separate console in the north chancel. Since then, the organ became increasingly difficult to maintain and experts advised replacement was the only cost-effective option. In 2019, an excellent pipe organ, originally built by Rushworth & Dreaper of Liverpool, became available at the Church of the Good Shepherd, Heswall, as that church was being rebuilt. The organ was secured for a nominal donation of £1000 and after full refurbishment was installed at St Luke’s in place of the old organ in September 2021. The cost of relocation and refurbishment including a new console and pedal board was met with monies from the special Organ & Lighting Appeal started in 2020. 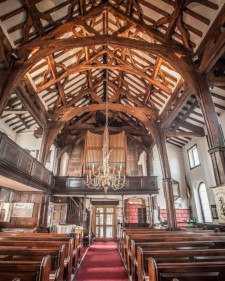 The roof is an example of scalloped oak work from 1425. It is a tie beam, queen post roof restored in 1935 when the plaster concealing the beams was removed. The medieval roof was hidden in 1702 when Thomas Hall, ironmaster, carried out major changes to the structure of the church and three arched plaster ceilings were created to retain warmth in the unheated church. 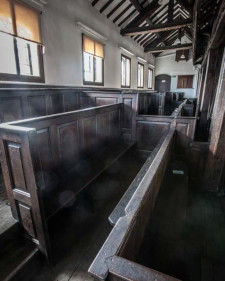 The gallery has been in place since 1705 and was the gift of Thomas Hall. The centre panel on the west side is inscribed in large gold letters “Ex Dono THAL 1705” – the monogram of Thomas Hall. There are three rows of stepped pews running along the south side. These box pews are the original oak ones that filled the church until 1879. Many examples of graffiti can still be found on the ledges along the length of each row. 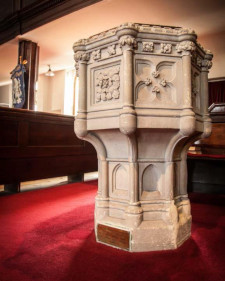 The present stone font dates from 1890 as a gift from William Joseph Stanier. This replaces two earlier fonts, one dating from 1839 presented by Rev John Armitstead and one from 1721 paid for by Mr Morfitt for 16/6d. 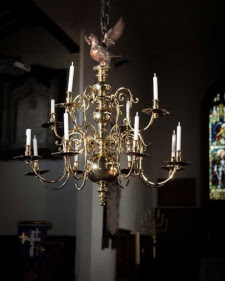 Thomas Hall, iron master, gave this brass chandelier mounted by a wooden dove to the church in 1708. It was made by Cheshire craftsmen and is said to be one of a pair. 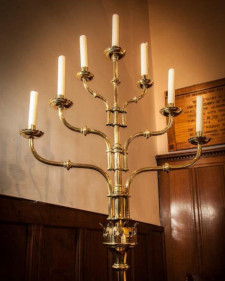 This is one of a pair of seven- branched candelabra, dating probably from 1890, which stand each side of the altar. 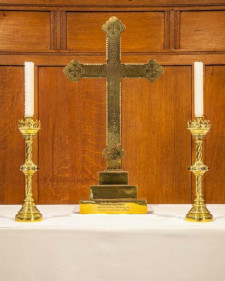 The candlesticks date from 1910 and were given by Mrs Reiss of the Hermitage and the brass cross was given by Dr Sutton in memory of his son who died in 1895. 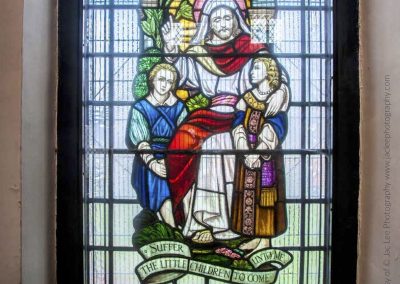 This window is in the north aisle and was given by the people of Holmes Chapel in memory of the late Dr Lionel Picton. It shows Christ with the children and has the text “Suffer the little children to come unto Me”. 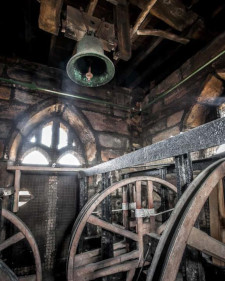 Today there are seven bells – all of them are dated. Five have the date 1709 with references to England gaining victory over the French in the War of the Spanish Succession. The other two are dated 1858. Between the 16th and 18th centuries one bell, known as the Dagtail, was rung hourly between 6am and 6pm for the labourers in the fields. In April 1910 muffled bells were rung each evening between 6th April, the day Edward VII died, and his funeral on the 20th. When Queen Elizabeth II was crowned on 2nd June 1953, the bells were rung four times. 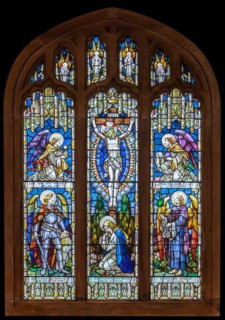 This window was erected in memory of the men who lost their lives in the First World War 1914-1918. It was unveiled in 1921 and cost £493. The centre light is “The Supreme Sacrifice” showing the cross of Christ with his mother mourning at his feet. The north light shows the Angel of Pain holding the cup of sorrow and below the Warrior Archangel Michael. The south light shows the Angel of Pity and below Archangel Raphael the healer. In 2013, the window was removed to be restored and was reintroduced 6 months later at a cost of approximately £13,000. There are 4 liturgical seasons in the church year and each season has a particular colour indicated by the altar frontal. Green is for ordinary time – the longest season of the year. Purple is for Advent and Lent – seasons of preparation. White is for Christmas and Easter, festivals particularly associated with Jesus. Red is associated with Pentecost – also known as Whitsun – and for Remembrance including any Saint’s days the local church wishes to commemorate. The pulpit fall and the vicar’s stoles also match the frontals. 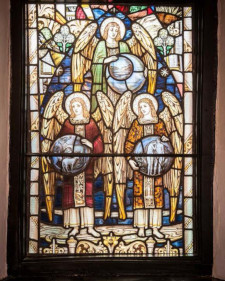 This is located in the South East aisle. The window depicts three angels of the creation. It is a late Victorian window donated in 1977 by an anonymous person. In 1973, the chapel was dedicated to the Rev John Vernon Culey who was vicar from 1946–1969. There is a brass plaque on the south wall of the sanctuary to commemorate this. 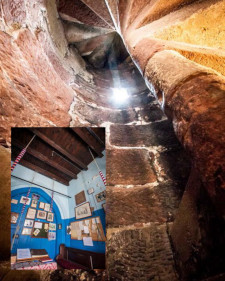 The sandstone tower is the oldest remaining part of the church, dating from the early 15th century, and is now reinforced with iron tie-bars. Narrow tapering stone spiral steps (shown) accessed from the porch lead up the tower to the bell-ringing room (shown inset), the clock room, the bell chamber and then to the tower roof and flag-pole. 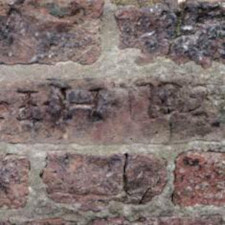 Maker’s marks and dates are still visible imprinted on the face of a hand-made brick (1782) at the base of the outside North Aisle wall. 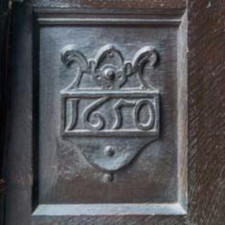 Maker’s marks and dates are still visible on a date plaque (1650) fixed to the inside wood panelling beside the North Aisle door.