April 2020 letter from our vicar Rob 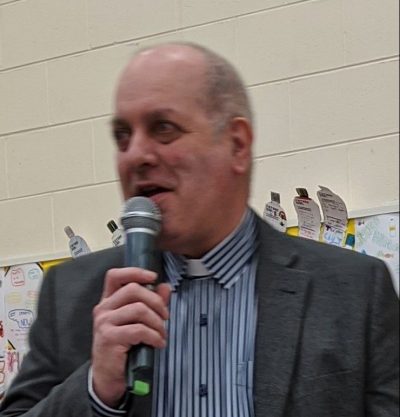 I discovered this piece from The Gospel Coalition, quoting one of the most insightful Christian writers of the Twentieth Century, whose BBC radio programmes during the dark times of World War Two had 1.5 million listeners.

On the next page, we give some of the procedures we have put in place, to help slow the spread of the coronavirus and to help protect the most vulnerable in our community.  But here is a timeless commentary to put the potential threat into some sort of perspective.  Times of fear come on all generations.  But those who fear God need not fear anything else.  God’s perfect love casts out fear.

It’s now clear that COVID-19 is a deadly serious global pandemic, and all necessary precautions should be taken. Still, C. S. Lewis’s words—written 72 years ago—ring with some relevance for us. Just replace “atomic bomb” with “coronavirus.”

In other words, do not let us begin by exaggerating the novelty of our situation. Believe me, dear sir or madam, you and all whom you love were already sentenced to death before the atomic bomb was invented: and quite a high percentage of us were going to die in unpleasant ways. We had, indeed, one very great advantage over our ancestors—anaesthetics; but we have that still. It is perfectly ridiculous to go about whimpering and drawing long faces because the scientists have added one more chance of painful and premature death to a world which already bristled with such chances and in which death itself was not a chance at all, but a certainty.

This is the first point to be made: and the first action to be taken is to pull ourselves together. If we are all going to be destroyed by an atomic bomb, let that bomb when it comes find us doing sensible and human things—praying, working, teaching, reading, listening to music, bathing the children, playing tennis, chatting to our friends over a pint and a game of darts—not huddled together like frightened sheep and thinking about bombs. They may break our bodies (a microbe can do that) but they need not dominate our minds.

— “On Living in an Atomic Age” (1948) in Present Concerns: Journalistic Essays [see https://www.youtube.com/watch?v=oxFmkg5dcyk]

At the time I write, the C of E has just issued its guidelines for churches and the government has indicated we have moved from the ‘contain’ stage to the ‘delay’ stage, admitting the virus will spread widely, and focussing efforts on slowing it down.

At St Luke’s, the Church Council is encouraging everyone to follow the guidelines in order to help slow the transmission of the disease, to help protect the vulnerable amongst us and to help those badly affected by the illness or the isolation or the economic hardship.  The advice is changing regularly but as of 14th March we were:

Thank you so much for your care and cooperation.

It is a strange and disturbing backdrop for the season of Holy Week and Easter.  But there again, the first Easter was a profoundly disturbing time.  The cruel execution of the innocent Jesus, the despair of his followers, the fickle moodiness of the crowds, the scattering of God’s people.  It was a time of suffering and death. It was the once and for all sacrifice which means that sin and death do not win.  Jesus won the battle which means, if we rely on his victory and follow him, we need not fear.

Easter is worth celebrating all the more when the world’s troubles are heightened.